Is "Good German" Status Quo The Order Of Our Day? #Aegis9


Today's guest post by civil disobedient Jason Rawn was rejected by the Times Record. A daily paper local to General Dynamics' Bath Iron Works plant, the Times Record customarily publishes a monthly opinion column written by various Peaceworks members. In July the editor refused the submitted piece saying that drawing connections between the present day and the Holocaust is "a bit much." But is it? You be the judge.


Are We The "Good Germans" Now?

I'm not sure why, but the bagpipes before the Red Sox game against Toronto over the Independence Day Weekend got me thinking about international law and whether it affects us locally in Midcoast Maine. International law and solidarity help motivate people around the world to work together toward peace and justice. International law, including the Nuremberg Principles, has been a significant motivator of three groups of activists who have demonstrated at BIW for peace and conversion of the so-called "permanent war economy" over the decades.

On Easter Sunday, March 31, 1991, 5 activists with the Plowshares movement were arrested for "monkey-wrenching" US warmaking at BIW. (Plowshares actions are well-planned nonviolent direct actions that have taken place around the world against warmaking. They often incorporate candles, prayer and other elements of Catholic worship.)

The 1991 Plowshares action at BIW consisted of hammering and pouring blood on the cruise missile launch systems of the Aegis-equipped USS Gettysburg. They left behind a statement "against the American enslavement to war at the Bath Iron Works." Citing the deaths of thousands of Iraqi people, they left an indictment charging Bush, Cheney, the National Security Council, and the Joint Chiefs of Staff with war crimes.

According to the book Swords Into Plowshares: Nonviolent Direct Action for Disarmament, Peace, and Social Justice, after spending nearly two hours in the shipyard and on the warship, the five turned themselves in and were arrested. "After rejecting unsecured bond in court on April 1, all five were released unconditionally on April 3 pending trial by the state of Maine on charges of criminal trespass. Without explanation, the state decided against prosecuting them, and charges were dismissed one day before their scheduled trial."

Over the past year or so, I've risked arrest and have been arrested at the last two "christenings" of General Dynamics’ warships. Despite the fact that my fellow demonstrators and I were working to uphold international law, those who stood trial were found guilty of "obstructing the public way" by a jury of our peers in our 3-day "Zumwalt 12" civil resistance trial last February. We had been arrested in Washington Street outside the June 18, 2016 demonstration at the christening of the USS Michael Monsoor, one of three $7 billion Zumwalt first-strike destroyers slated to be made at BIW. (We perpetrators have since contributed over 300 hours of court-mandated community service throughout Maine.)


Last April Fools Day, nine of us (The "Aegis 9") were arrested in the snow and slush during a nonviolent protest at the christening of the USS Thomas Hudner, an Aegis first-strike destroyer. This year's arrests came 27 years almost to the day after the 1991 Plowshares action. It remains to be seen whether charges will be dropped right before trial this time around. Judge Matthews, Justice Billings, and the prosecution all made it clear that jail is a possibility for some defendants if found guilty by their peers on the jury. This multi-day trial is likely to be in either September or November.

Will international law hold any sway in the Aegis 9 trial, or will a "Good German"-style status quo win the day?

Good Germans were those who followed Nazi orders and made possible the bureaucracy and infrastructure of the Holocaust. The Nuremberg Principles were created, in part, to make it clear that individuals are, indeed, responsible for their actions: supposedly, there's no "just following orders" defense. The Nuremberg Principles resulted from the trial of over 1,600 Nazis beginning in 1950. This brief charter of seven principles of international law states, among other things, that the planning and the preparation for wars of aggression are crimes against peace.


Looking at the proliferation of US war bases around the world - over 800 - and the fact that both the Aegis and the Zumwalt destroyers which dock at some of those bases are first-strike weapons, it's easy to consider continuous US military intervention as war of aggression, easy to consider US foreign policy as criminal. But what about the planning and preparation by General Dynamics for this continuous war of aggression, which is essentially their business model? At what pay scale (if any) could employees of weapons manufacturers be held liable for their livelihood-related crimes against peace?


Are either of our multimillionaire US senators - both of whom have accepted tens of thousands of dollars in campaign sponsorship contributions specifically from General Dynamics, not to mention impressive sums from other war profiteer corporations - accomplices in these crimes against peace?


And what about us taxpayers who pay for the warships themselves? Do we, as a whole, know that over half of the discretionary portion of the federal budget pays for war?

And do we taxpayers also pay the $21.2 million-a-year salary of General Dynamics Corp's CEO, Phebe Novakovic?


(Over $5 million of that compensation package was a bonus!)

Once you start looking, it's hard to miss the significant connections between global warfare, our local community and economy, the health of our rivers, cuts in human needs spending, and even just the view from the bridge as you take in the rotating exhibit of warships as you cross.

Nuremberg Principle IV states that the fact that a person acts pursuant to order of a government or of a superior does not relieve him from responsibility under international law provided a moral choice was in fact possible to him. 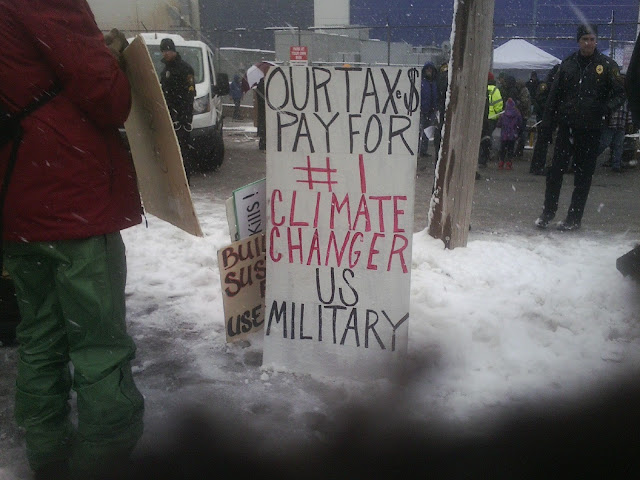 We have choices as humans, as workers, as taxpayers, as citizens, as Earthlings.


We must recognize this. And act (or not act) accordingly. At least that's what they thought in the direct aftermath of German fascism.

Jason Rawn is a member of PeaceWorks. He lives in Bath, Maine.