Why Won't @SenAngusKing #MovetheMoney From "Defense" To Human Needs? 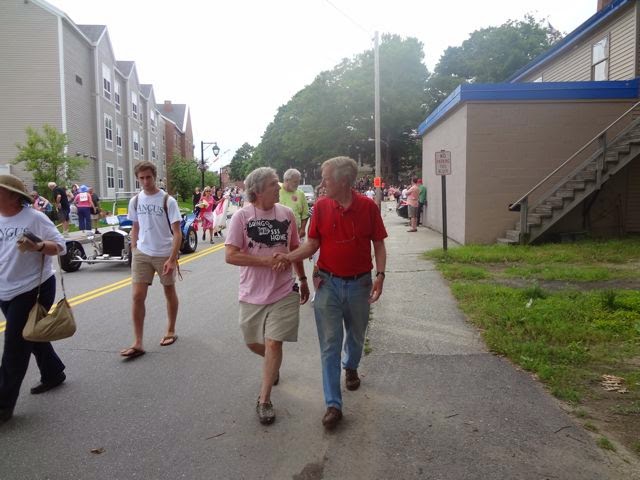 I got an email letter this week from Maine's newest senator, Angus King, seen here shaking hands with my husband near Bath Iron Works on the 4th of July, 2012. Mark is asking Angus, If elected will you support the campaign to bring our war dollars home and use them to meet social needs instead of enriching "defense" contractors? Angus replied that it sounded like a good idea.

This is the standard line politicians seeking elected office give voters who voice the priorities that a majority in the U.S. hold. People consistently prefer spending on education, health care and veterans benefits to spending on bombs and wars, and politicians know it.

Politicians also know who they want to work for once they get in office where their votes can be sold for big, big money. Here's how Angus explained it to me in response to my letter demanding the war budget, euphemistically named the Overseas Contingency Fund, be abolished as a stand alone fund, and that the Pentagon budget be redeployed: 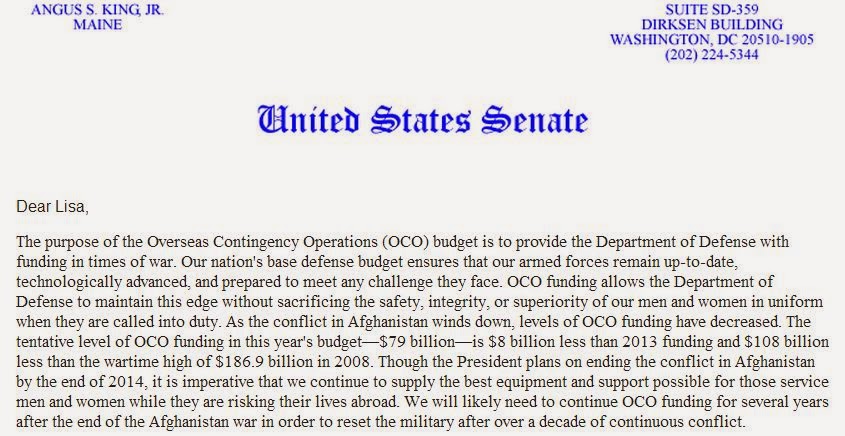 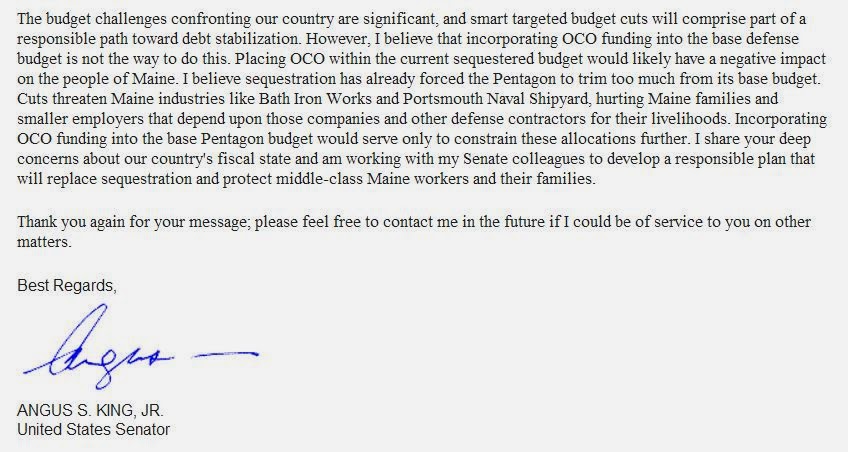 When the U.S. kills and injures millions of innocent people and destroys countries around the globe it's all about jobs, see?

Never mind that Angus has a copy of research showing that "defense" contracting is one of the worst job generators we know.  CODEPINK activists delivered the report to staff at his Augusta office the first month he was in the Senate. It's all about jobs -- that's his story and he's sticking to it. (Probably the same reason he'll give for his support of fracking.)

Same story Rep. Chellie Pingree stuck to once she took her seat in Congress. Same story Rep. Mike Michaud hides behind as he runs for governor, and same story we hear from Sen. Susan Collins, darling of the "defense" and "intelligence" corporations.

My friend Bruce Gagnon lives on the doorstep of Bath Iron Works and recently took delivery of a banner from the Union of Maine Visual Artists ARRT! team. 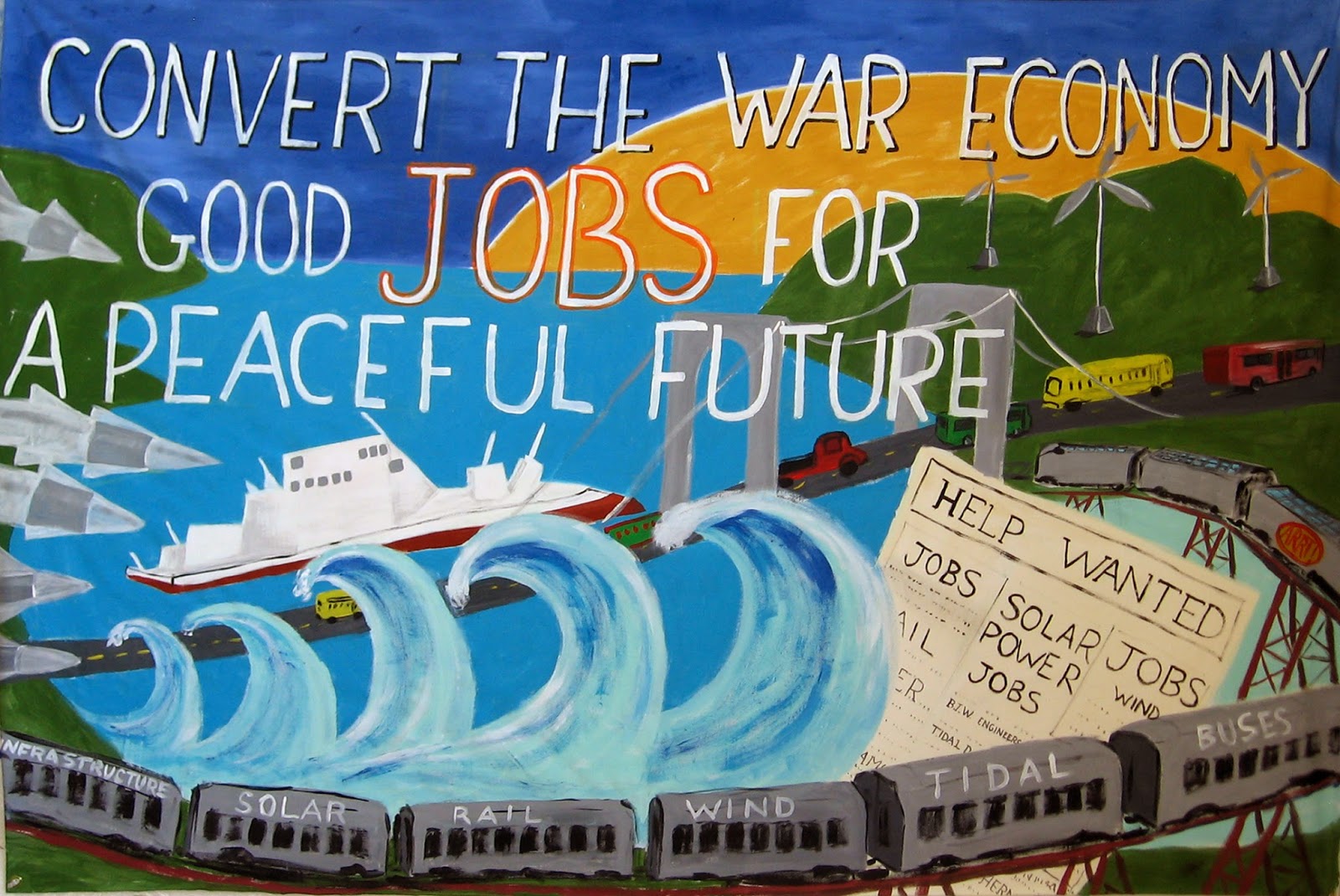 The banner was created for upcoming protests on April 12 at the launch of a new, super violent, super expensive type of weapon made in Bath for the profit of General Dynamics executives and shareholders. Based on past experience, I expect Angus King and Chellie Pingree and the rest will be in the limos that whisk VIPS through the gates at BIW at launch events. Even the former Secretary of "Defense" Robert Gates showed up once with Susan Collins.

Maine is not unique in this regard. Jobs everywhere have been made to be dependent on the Pentagon's annual 50%+ share of federal spending.

Are you sick of the spin that makes evil priorities seem like business as usual?

You have two days remaining to enter a contest to create a shareable graphic comparing the cost of militarism to unmet human needs. CODEPINK teamed up with the National Priorities Project to create this opportunity to turn federal budget facts into compelling visual story telling. The contest ends March 31. Details on how to enter are here. The winning images will be shared during the Global Day of Action on Military Spending, April 14, and on U.S. tax day, April 15.

Here's CODEPINK's most shared image ever, for inspiration: 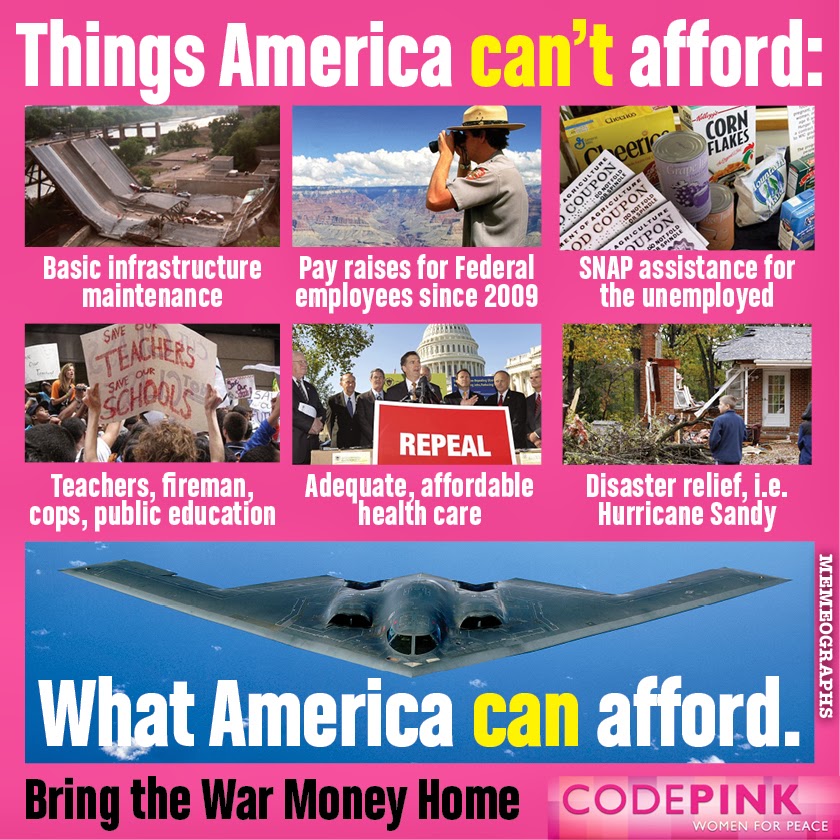 Posted by Lisa Savage at 4:32 AM No comments:

Moral Injury And The Costs Of Militarism #IWD2014


The corporate oligarchy ruling over us has managed to keep war and its effects largely invisible to the affluent. We feel the tug on our pocket books, but are told lies about what's causing that drain (it's the education budget, poor people on Medicaid, welfare cheats and lazy bums who ought to get a job).

We look away from our wars because it's the only view corporate mainstream media offers.

The conscience troubled by a map like this one is largely silenced.

See the big, empty continent on this map, the one with bombs and assassinations only on its southern edge? That is the moral injury zone.

It is, by the way, a continent filled with a prison system so vast that 2.3 million people are currently incarcerated, over half of them for non-violent crimes.

Because all that moral injury leads to a fearful state which must cage its citizens, not for thought crimes (there are of course special prisons for that) but mostly for the crime of being poor.

Every person wrongfully imprisoned has a family being injured, too.

Every bomb dropped on children anywhere harms us all. 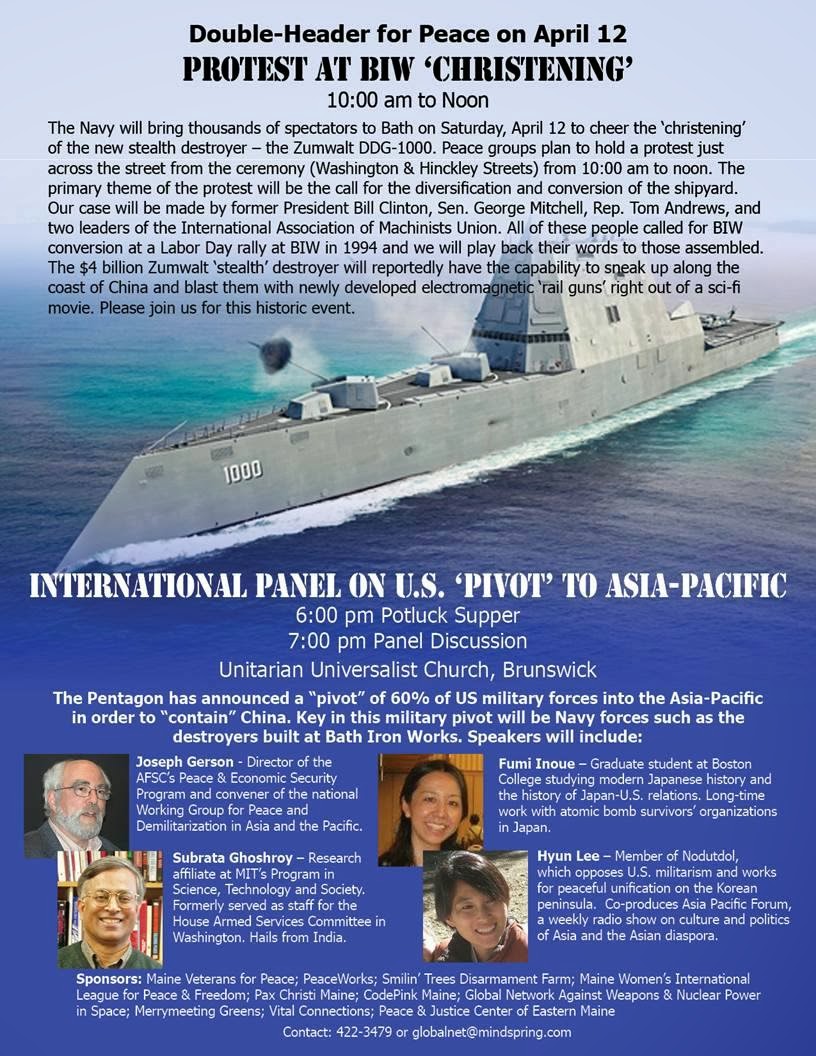 Today, on International Women's Day, let us raise our voices for feminist values: life, truth telling, and honoring and protecting the children of the world.

Posted by Lisa Savage at 5:00 AM No comments:

Peeking behind the curtain of President Obama's announced "pivot to the Pacific" we see the U.S. military operating in that region over the long haul. From the gunboat diplomacy that forced Japan to open its markets to U.S. commercial interests in 1853-4, and the nuking of Hiroshima and Nagasaki in 1945 followed by the Marshall plan, to the imposition of an enduring military footprint (the largest outside the U.S.) we see our tax dollars at work.

These public expenditures make way for corporations like General Electric -- which has paid no taxes for the last five years -- to sell nuclear reactors to Japan, including the Dai-ichi reactors that exploded and melted down following the earthquake and tsunami of March 11, 2011 (aka 3.11).

Some citizens are aware that U.S. Navy personnel present off the coast of Japan near Fukushima during 3.11 are suing TEPCO, the company that operates the Dai-ichi plant, for $1 billion in compensation for illnesses they have developed. Eyewitnesses say the ship was several miles off the coast of Fukushima in a snowstorm when a warm cloud with a metallic taste enveloped them. The 71 sailors, most in their 20's, cannot by law sue the U.S. government for damages; their health symptoms include leukemias, random bleeding, thyroid troubles, polyps, and the loss of a testicle and an optic nerve.

Radioactive waste water continues to flow into the Pacific as you read this sentence.

Enter the Freedom of Information Act.

"Mobilizing Nuclear Bias" in the Feb. 17 issue of the Asia-Pacific Journal: Japan Focus lays out who knew what when based on research by Kyle Cunningham, including information obtained via FOIA requests he filed. Cleveland also conducted "in-depth interviews with diplomats in foreign embassies, military officials, journalists, nuclear scientists and scholars." What emerges is a picture of Japanese government officials, mainstream journalists, and U.S. diplomats scrambling to cover up truth at the expense of getting people to safety.

All quotes are excerpts from Cunningham's groundbreaking report:


...in the first few days of the crisis, with little meaningful information being provided amidst the disorienting impact of the earthquake and tsunami, and TEPCO offering assurances that were uncritically passed on by the government and a docile press, hope remained that the situation could be brought under control. This wishful thinking was soon made irrational by the explosion of the outer containment structure of reactor #1, which was so powerful (the explosion broke windows 3km from the plant) that both plant workers inside the Daiichi complex and nuclear experts watching from afar initially believed that the reactor core itself had exploded.

With the explosion of the reactor #1 building there was no doubting the significance of this crisis, but calibrating the actual risk and danger that this presented to the general public was a moving target, with competing risk narratives that developed almost immediately...

In the first few days of the nuclear crisis the information made available to the public was confusing, contradictory and frustrating. Despite a massive explosion that destroyed the outer, secondary containment structure of the Daiichi reactor #1 building, soon to be followed on the next day by a similar explosion of the reactor #3 building, TEPCO insisted that the primary reactor core containment was intact and that there were no releases of radiation that posed a threat to public health. Initially, conjecture held sway, with the foreign media challenging the Japanese press corps, who did little more than pass along TEPCO's announcements, essentially serving as a PR agency for the utility.

Unfortunately, we in the U.S. are all too familiar with corporate media serving in this capacity for wealthy corporations and their public servants. The  U.S. Constitution guarantees freedom of the press, but declines to say how that is to be achieved when money controls communication channels. Japan, taking no chances, passed a highly controversial State Secrets Law in the wake of the Fukushima disaster.

And as we have seen in debates over climate change, or the effects of genetically modified foods, science takes a backseat to crisis management when there are profits at stake.


For nuclear experts, the debate over whether or not meltdowns had occurred was largely a political controversy being played out in the echo chamber of the mass media, as it was taken as a given that significant meltdowns had started early in the trajectory of the reactor accident progression (TEPCO would later specify that within 8 hours after the loss of power, meltdowns had occurred)

...while the media debated the relative chances of a meltdown and quibbled over the nomenclature, the nuclear experts who worked the crisis knew early on unambiguously that the Daiichi plant was in deep trouble.

Cunningham reports that U.S.military officials early on began gathering their own information and acting accordingly to protect their own interests. Social media outlets such as Twitter became important sources of scientific information as TEPCO and the Japanese government continued to minimize threats to public health.

What U.S. officials knew may be surmised from this little-reported fact:


...while the official stated position maintained that radiation was near background levels in these locations and thus no danger to public health, D.O.D. dependents, including the families of embassy officials in Tokyo and at the U.S. Consulate in Nagoya were given support (the flights were free of charge) to leave Japan. Through a mission named "Operation Pacific Passage" approximately 7,800 D.O.D. dependents (including about 1,200 families) left Japan...

Expatriates without official connections were on their own to face decision making in a chaotic vacuum, with vastly inflated airline tickets costing up to $20,000.


“Fly-Jin” (a contraction variant of the Japanese word “Gaijin,” a derogatory slang for a foreigner)...were accused of using the crisis as an occasion to take a paid holiday while waiting out the crisis. This label had originated on Twitter feeds as a sarcastic pun, and came to be used more generally to describe foreigners who had abandoned Japan out of fear for personal safety.

Japanese citizens, meanwhile, in some cases evacuated directly into the radioactive flume due to a lack of accurate information from either TEPCO or their government.
Also, diplomatic relations with Japan were seen to preclude the sharing of information that foreigners had access to and were acting upon in moving their own personnel to safety.


...it took considerable finesse to implement procedures out of line with the Japanese official response while seeking to avoid the diplomatically troubling insinuation that these policies were an implicit critique of the Japanese government’s crisis management procedures.

Information wants to be free, and Kyle Cunningham has shared a lot of it. Too late to be of much use to people living near Fukushima, but that's not his fault.

If,  like me, you're interested in the management of information for profit, it would be well worth your time to read the whole report.
Posted by Lisa Savage at 8:10 AM No comments:

Email ThisBlogThis!Share to TwitterShare to FacebookShare to Pinterest
Labels: Fukushima, pivot to Pacific

Posted by Lisa Savage at 5:13 AM No comments: