Do You Want A Toxic Missile "Defense" Site in Maine?

I don't want a toxic missile "defense" site anywhere, including my state, where the Appalachian Trail reaches its northern limit in the western mountains, and waterways abound. Rangeley is in my backyard, so my husband and I went to what turned out to be a fake public meeting about a proposed missile site which was held at the Univ. of Maine in nearby Farmington this evening.

(I would have liked to be in Ferguson, Missouri -- but instead watched the I Am Mike Brown livestream. Huge peaceful crowds, mad honking in support, and when police begin driving through crowds running their sirens the whole crowd turns toward them, raising both hands to protest racist police brutality.)

Now the Pentagon, at my expense and yours, brings around a lame presentation with scores of highly paid men, some government employees but even more Pentagon contractors. As you enter the room you are pounced on by salesmen who try to steer you through a series of stations with exciting videos of missiles flying through the air and charts of how well the interceptor missiles perform in perfectly flat deserts.

There is a lot of emphasis on "you getting your questions answered." 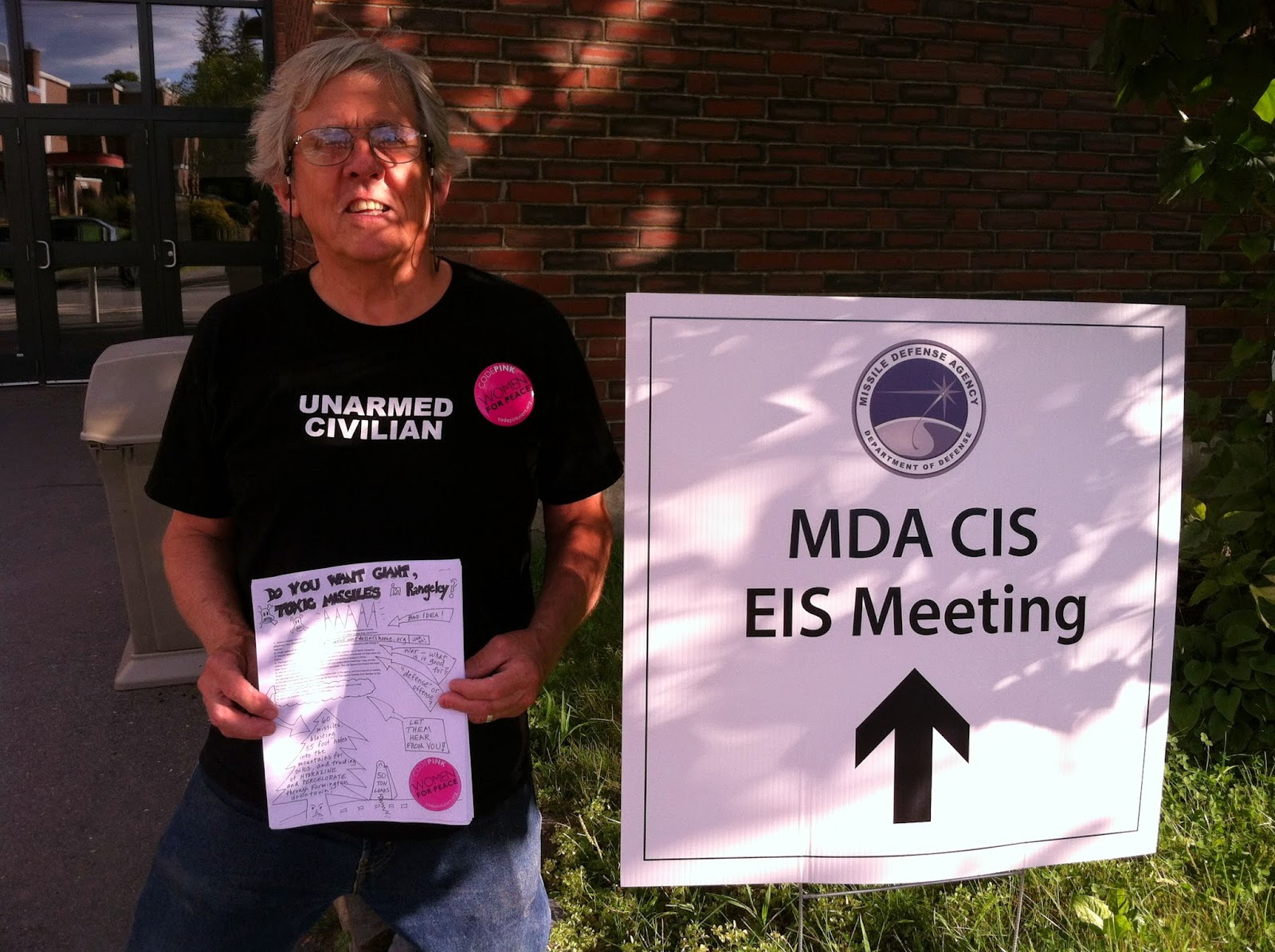 Mark and I were sharing flyers that offered six basic objections to a missile site in Rangeley (thanks Bruce Gagnon):


1)  Ground-based mid-course missile defense systems have not proven themselves to work effectively thus deployment is way premature assuming one could make a case they were even needed.

2)  Huge waste of tax payer dollars. To which I added: bringourwardollarshome.org

6) The environmental degradation to the mountains east of Rangeley, and the impacts on wildlife, are totally unacceptable. The idea of driving 55-foot long interceptor missiles from Bangor to the Rangeley area on country roads is ludicrous.

We shared them with the press that was there, and together gave an interview to WCSH Channel 6 t.v. out of Portland.

Because we had done our own research, we weren't really there to gather information from the military on its own project. That would have been like relying on a car salesman to get all you needed to know before buying a car. 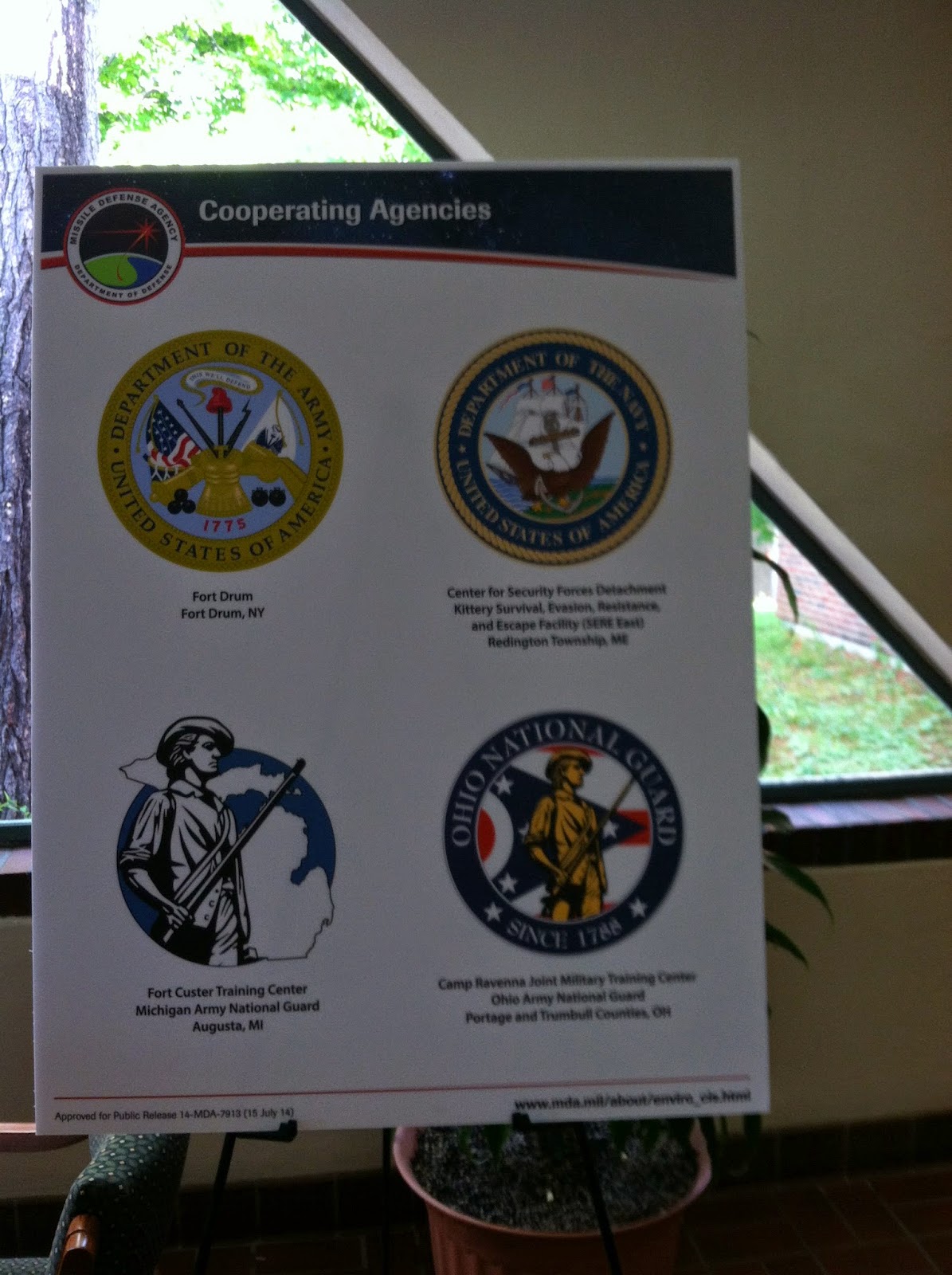 For example, though the missiles supposedly are to defend the U.S. from threats from Iran and North Korea, none of the guys in dress uniforms could tell my husband how far it is from Rangeley to Iran. 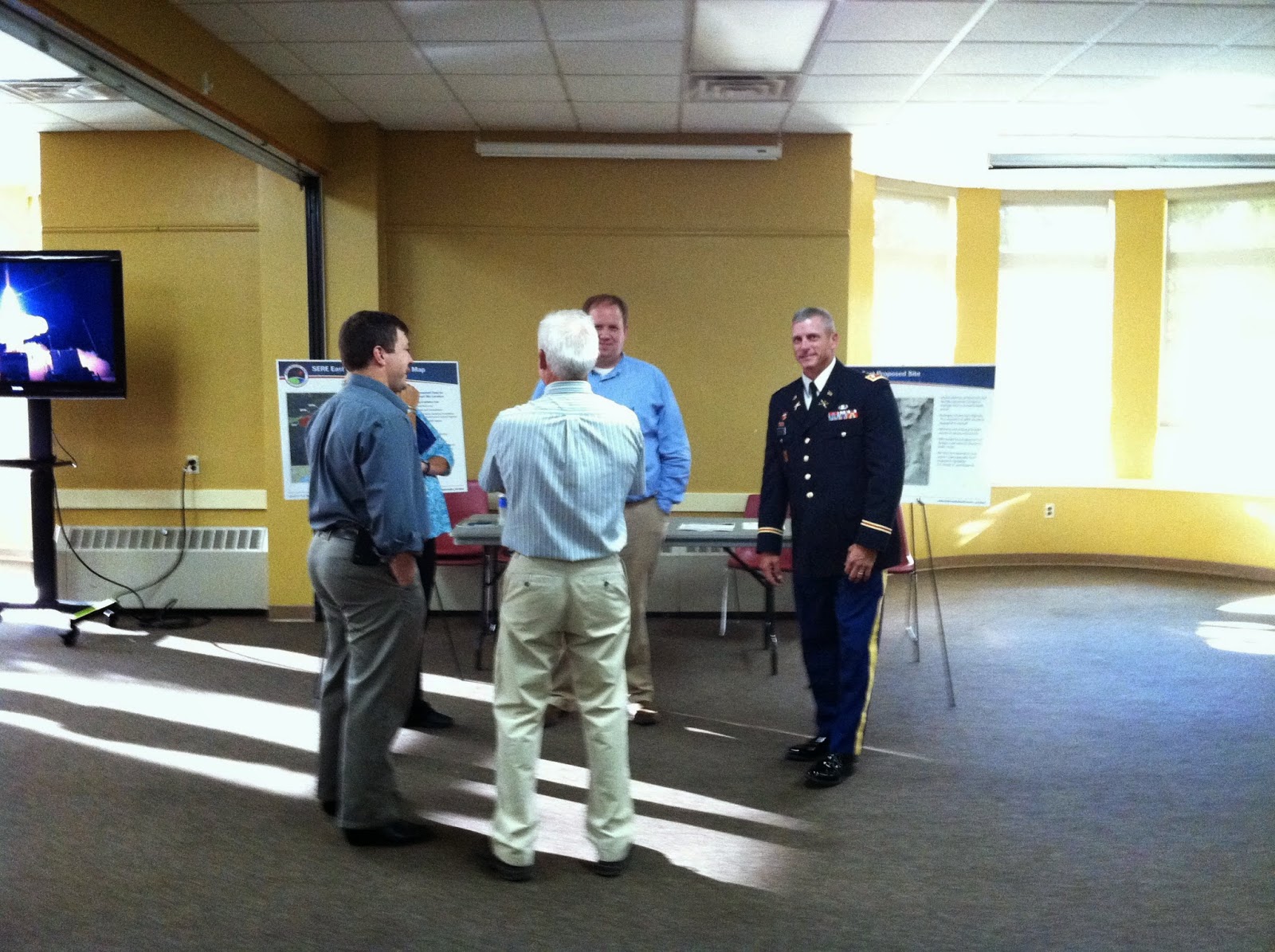 The event had the feel of a recruiting opportunity, but all the young people were missing (UMF is still on summer break).

If you wanted to leave comments they had a court reporter hired to record you and then transcribe them. You could also write them out on paper.

One of the sales guys steered me toward talking to Sen. Angus King's regional representative, who said he could express no opinions but was there to listen and bring my comments back. After I spoke he gave me his card and asked me to "articulate my views" in an email, which he would forward.

I went downstairs toward the sound of laughter to see if I could hand out some more flyers. Found some custodians who were glad to talk about the missiles and each wanted a flyer. One said she remembered the big public hearing a couple of years ago about the environmental impact of low-flying Mass. Air National Guard planes training over our area. You won that one, she noted.

I'm pretty sure that's why the missile boys hired a PR firm to create an event called a public meeting but designed instead as a trade show. The meeting part meant "us meeting you and telling you what we want you to know." 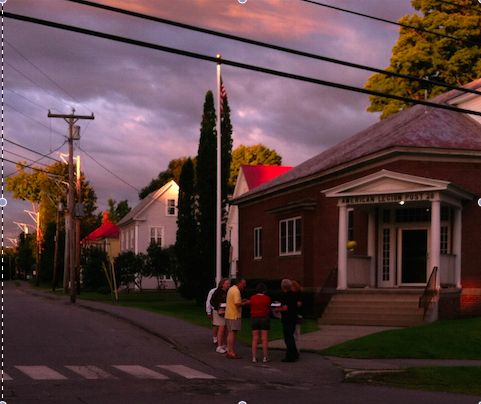 Almost no one we spoke to on the street in Farmington later knew anything about the proposed missile site. Everyone seemed glad to get a flyer.

If you want to send a message explaining why missile sites are bad for the environment, bad for the national soul, and bad for the prospects for world peace, you can submit a comment to the "Missile Defense Agency" at MDA.CIS.EIS@BV.com.

Posted by Lisa Savage at 7:04 PM No comments:

As Israel's image plummets around the world those still in the Zionist bubble -- for instance, the U.S. Congress -- continue applauding the vicious attack on Gaza that is turning the tide of public opinion. In disgusting outpourings of support for violence against Palestinian civilians, both the House and the Senate have shamed themselves. Yup, even the likes of Sen. Elizabeth Warren (D) and Sen. Bernie Saunders (I) have Israel's back and agreed to send even more ammo and weapons. And President Obama signed the bill.

Beltway unanimous agreement on anything would be incomprehensible were it not for the knowledge that the $3.1 billion in military aid to Israel each year is taxpayer supported corporate welfare for weapons manufacturers that make huge campaign contributions to candidates each year: Boeing, Hewlett-Packard, Elbit Systems Ltd., Lockheed Martin, General Dynamics, General Electric, Northrup Gruman and Raytheon. 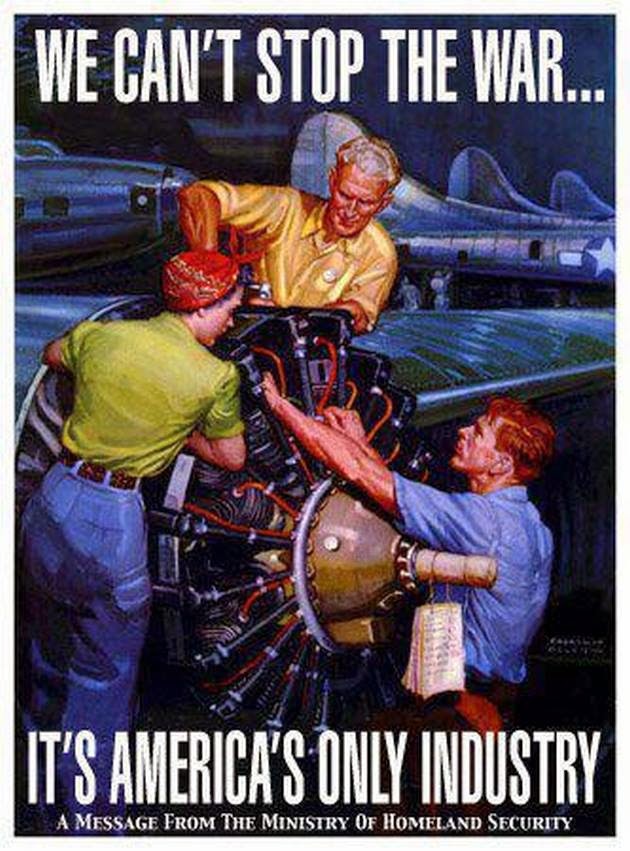 And then there is AIPAC, a cleverly designed front for various Zionist political donors. Maine Senator Susan Collins is heavily involved with them and, not coincidentally, in leading the call for more support of Israel's racist violence. Here's a video I made yesterday of some of her constituents in her Portland, Maine office reading the names of the children Israel has killed in Gaza since July 7. Word to Senator Collins: we will not be silent.

Albert Einstein, Hannah Arendt and Seymour Melman among others warned of the threat of Fascist Zionist Menachim Begin's "Freedom" Party via the New York Times in 1948.

Letter That Albert Einstein Sent to the New York Times
1948, Protesting the Visit of Menachem Begin
Thanks to my Codepink associate Sarah Roche-Mahdi for sharing the text of this letter reminding us once again that Zionism does not equal Judaism, and vice versa. That is the current best response to the bewildering array of people coming out of the woodwork to call "anti-Semitic" any critique of Israel's bloody apartheid.

Nowadays the NYT is wholly captive to the Zionist narrative, as this video made by their Jerusalem bureau chief Judi Rudoren's husband amply demonstrates.

And, this just in: 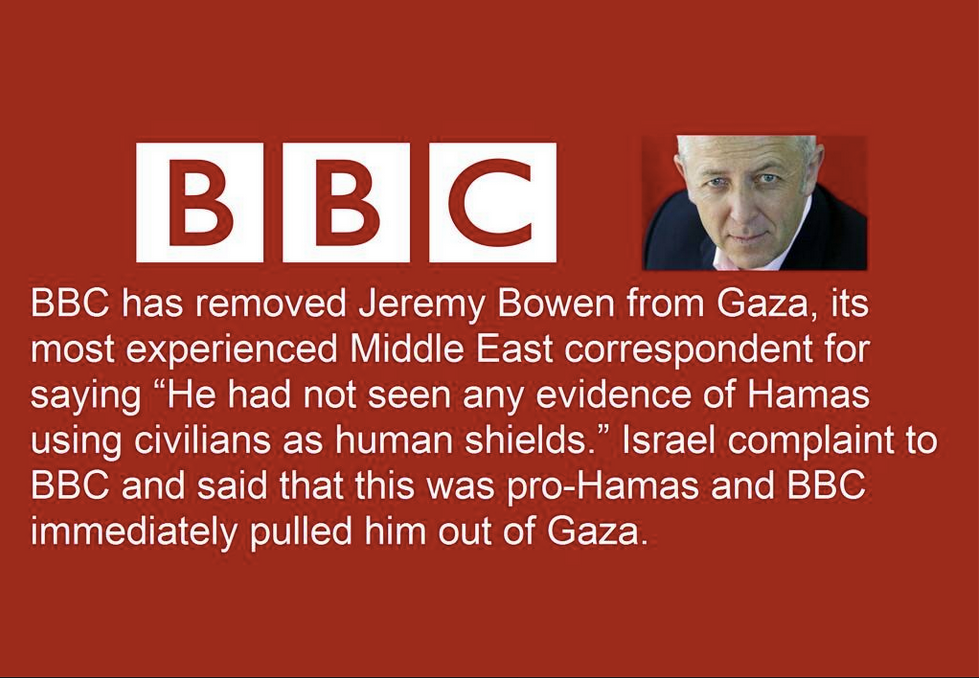 As we feel the currents of history shifting the ground beneath our feet it's horrifying yet fascinating to watch racism again deployed as a raison d'etre. The actions of nations like Israel, vigilante groups on the U.S. border with Mexico, and neo-Nazis in Ukraine make me experience deja vu of the creepiest kind.

I thought studying genocides like the Holocaust was supposed to help humans become less racist? This was to have worked by exposing the ugliness that racism entails. Instead, it seems to make certain adherents even more blatantly racist as long as they're convinced that they're on the "right" side. 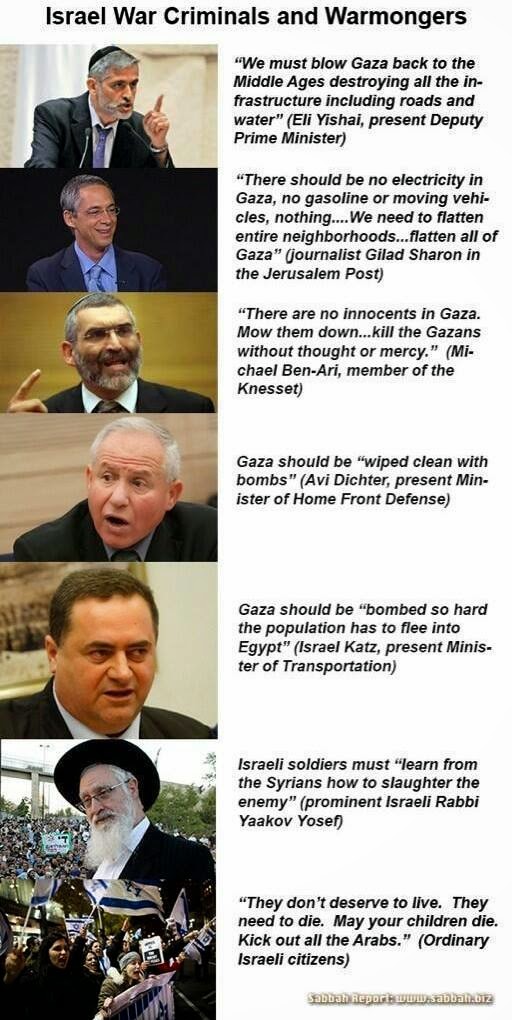 Then again, it's probably more a case of the super wealthy buying public opinion by catering the the lowest impulses of human beings: fear, xenophobia, and the tendency to look for scapegoats when things aren't going so well.
A friend of mine wrote her political science Ph.D. dissertation defending the claim that the Taleban aren't a religious organization, but instead use fundamentalist Islam as a way to consolidate their power among poor people in Afghanistan. That sounded familiar. Why else have right wing politicians in the U.S. embraced zealous forms of evangelical Christianity in recent decades? Based on what I've seen of their violent, lustful, thieving behavior, it's not because they are super religious.

As public opinion against the Zionist project shifts in the face of brutal attacks on civilians in the open air prison pen that is Gaza under siege, there is immediate pushback in the form of name calling. One cannot post a tweet sympathetic to Palestinians without drawing nasty (often paid) commenters and the accusation of anti-Semitism. If the person posting is Jewish and has turned against the apartheid policies of Israel, the nasty backlash accuses them of being self-hating. Jewish critics of Israel are an especially big threat because the claim of Zionists to speak for all Jews is the shakiest premise and the one most in need of vigorous defense.

Mainstream media outlets continue their collusion in propping up that particular lie. Here in Portland, Maine a Gaza support rally that drew 150 immigrants, students and ordinary citizens was characterized by Maine Public Broadcast Network as a shouting match between Zionists and rally goers. That's after a screaming Zionist showed up and began spouting hateful invective.

I wanted to let you know that this was a very short news piece within Maine Things Considered that our radio newscaster cited from the account published in the Portland Press Herald. We did not have an MPBN reporter on the scene. Here is the text of the story.


—-(Portland) -- Portland Police stepped in to separate a man and his son carrying an Israeli flag and a sign condemning Hamas from a crowd that had gathered in Monument Square to denounce Israel for the ongoing violence in Gaza. The Portland Press Herald reports that this is the third pro-Palestinian protest in Portland in three weeks. The paper says protesters argued loudly with the man before police intervened. ---


We have covered recent protests in Portland, and plan to cover the Seeds of Peace camp next weekend. I hope this is helpful.

The fact that MPBN is taking its Zionist cues from the newspaper owned by Rep. Chellie Pingree's husband did not make me feel one bit better about their biased reporting.
The fact that over $3 billion of U.S. taxes go to support Israel's military spending is a direct result of Congress looking the other way, ignoring the racism inherent in the many regimes we support with what amounts to corporate welfare. ("Here, Israel, buy some more weapons from Lockheed Martin and we'll pick up the tab.")

Whether it's racism for profit or racism as a nativist ideology, it's just as ugly and just as dangerous to the future peace of the world.
Posted by Lisa Savage at 11:27 AM No comments: