CODEPINK  and National Priorities Project have teamed up to sponsor a contest for the Bring Our War $$ Home campaign!

Contestants are invited to use their creativity to design a shareable image that shows what isn't being funded while the U.S. continues to spends $600+ billion a year -- year after year -- on the Pentagon budget.

National Priorities is the perfect partner for the contest because of their user-friendly federal budget tools. These tools can tell how much your town, city, state or congressional district actually paid in taxes for military spending -- and how many Head Start slots or college scholarships or solar panel equipped homes that could have funded instead.

Prizes include thousands of eyeballs on your winning image at both organizations' high traffic websites and on Twitter, Tumblr, Facebook and Pinterest, plus cash and CODEPINK swag. (Full contest rules and details here.)

The contest will be judged by activists all over the country with the winners announced in time for Global Day of Action Against Military Spending (GDAMS) April 14 and federal income tax day April 15.

Here are more awesome images from around the interwebs that I've collected to help get your creative juices flowing: 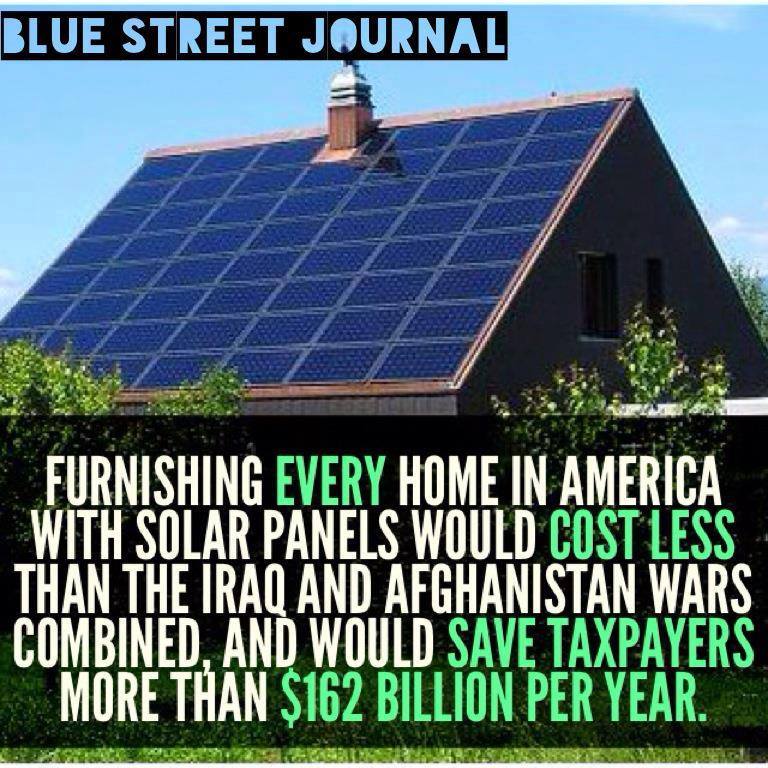 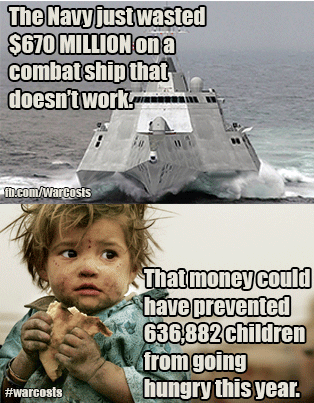 I created this one. You can do much, much better! 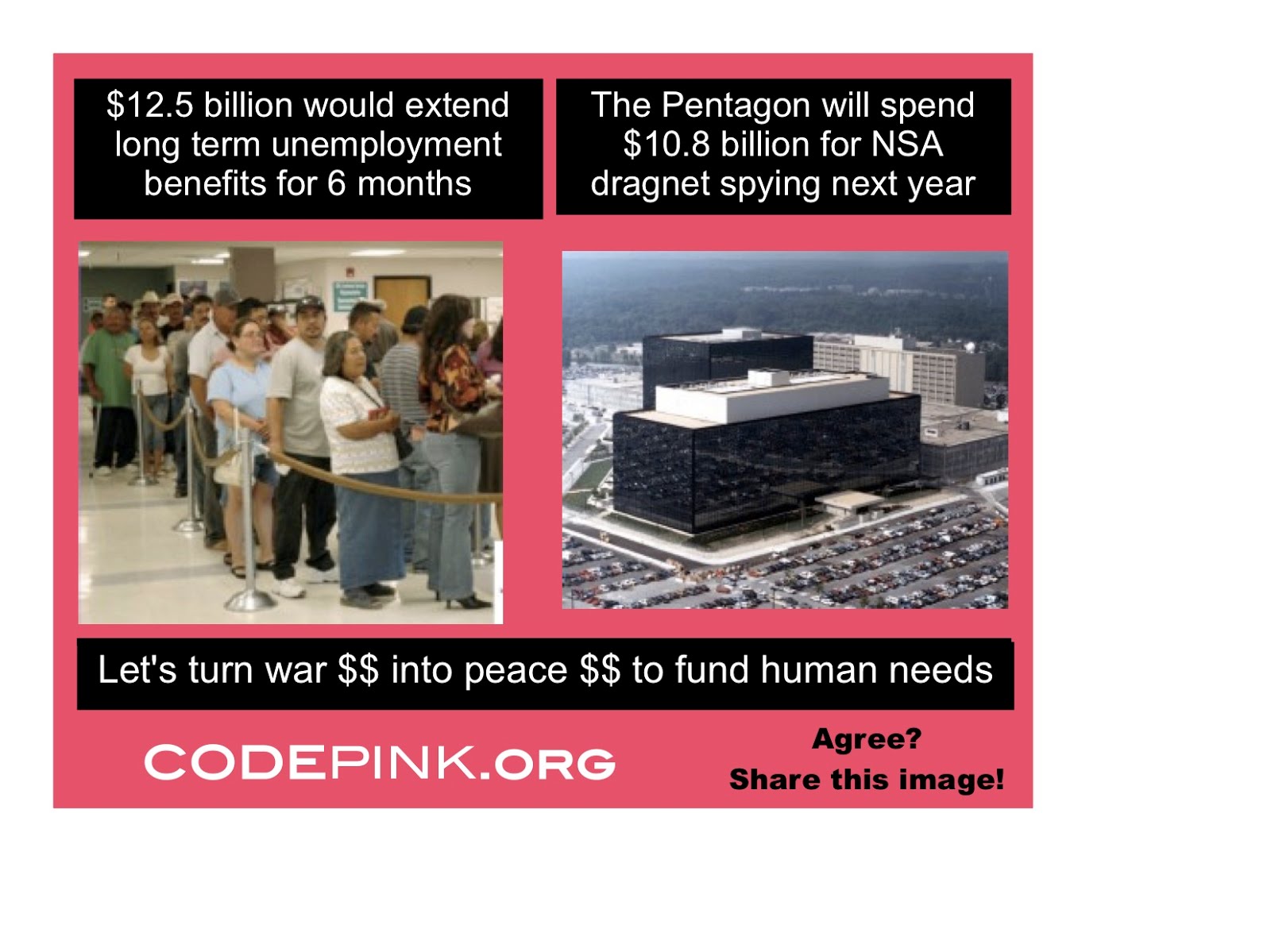 Email ThisBlogThis!Share to TwitterShare to FacebookShare to Pinterest
Labels: Bring Our War $$ Home

With great relief I share this press release from the human rights advocacy organization Reprieve, announcing the release of a kidnapped drone activist in Pakistan.

A Pakistani drone victim who had been missing since being abducted from his home by men in police uniforms on February 5 has been released. Kareem Khan, who had not been heard from since being taken from his Rawalpindi home, was freed earlier today (February 14). Mr Khan lost his son and brother to a 2009 CIA drone strike, and had been set to travel to Europe to discuss his experiences with parliamentarians when he disappeared.  He was also involved in legal action against the Pakistani police over their refusal to investigate the killing of his relatives.

While detained, Mr. Khan was interrogated, beaten and tortured. He was placed in chains and repeatedly questioned about his investigations into drone strikes, his knowledge of drone strike victims and his work advocating on their behalf.In the early hours of this morning (14 February), he was driven to the Tarnol area of Rawlpindi, where he was thrown from a van after being told not to speak to the media.

Mr. Khan is now with his lawyer, Shahzad Akbar, a fellow of human rights charity Reprieve.  Mr. Akbar, who is also director of NGO the Foundation for Fundamental Rights, had filed ‘habeas’ proceedings in the courts earlier this week in an attempt to secure Mr. Khan’s release.  In response, a judge from the Rawalpindi bench of the Lahore High Court had ordered the Ministry of the Interior, which has oversight of the Pakistani intelligence services, to produce Mr. Khan by February 20.

Mr. Khan plans to go ahead with his trip to meet parliamentarians in the UK, Germany and the Netherlands later this week.  Mr. Khan said: “When I was picked up I thought I would never see my family again, that I would never be free again because of all the stories I have heard about disappeared people. Now that I have been released and have seen the news, the efforts of activists, I know it is because of them that I am free, and I would like to thank them.”

Mr. Khan’s lawyer, Shahzad Akbar said: “What happened to Kareem Khan in last few days is nothing new in Pakistan. We are living in a state of lawlessness where the executive enjoys impunity. The lesson learned though this experience is that we must always raise our voices. We need to take this stand for each and every person who disappears, it is the only way to force those in power to listen. That is why I am so thankful to all the local and international activists who spoke out for Kareem.”

Reprieve legal director Kat Craig said: “It is a huge relief that Mr. Khan has finally been released, though we are deeply concerned to hear about the mistreatment he has endured.  No one should have to suffer as he and his family have done for simply trying to get to the truth about the deaths of their loved ones.  Serious questions remain for the Pakistani Government on how this was allowed to happen.”

Posted by Lisa Savage at 7:15 AM No comments:

Debuting with a blockbuster piece of investigative reporting that goes a long way toward explaining why all those thousands of innocent civilians have died in U.S. drone strikes these many years, The//Intercept reveals that phone metadata guides the bombings. (Just not very accurately.)

"The NSA's secret role in the U.S. assassination program" has been published by a new media entity set up to defend and promote "journalistic ethos" according to founders Laura Poitras, Glenn Greenwald and Jeremy Scahill.

Posted by Lisa Savage at 3:59 AM No comments:

This terrific letter from a man who has known the horror of war as a US invader of Iraq was in my inbox yesterday. I'm glad to share it here. You can sign his petition demanding we NOT send weapons to be used on the residents of Fallujah.

I am writing to you veteran-to-veteran, man-to-man. However, I have decided to write to you publicly. The issue that I am writing about is too important, too many lives depend on it, and I cannot take the chance that this letter and the linked petition will only reach the eyes of one of your aides.

Like you, I felt betrayed that my country sent me to fight an unjust war, though my war was several decades after yours, and in Iraq. I have spoken out against that war to the best of my ability, as you once did against your war before the Senate Foreign Relations Committee. In recent years you have found yourself on the Senate Foreign Relations Committee, but your attitudes towards war have changed drastically.

You supported the war in Iraq, the war that I was deployed to as a Marine, where I participated in the 2nd siege of Fallujah. You were at the end of your Presidential run during the build up to this operation. The 2nd siege of Fallujah was compared to Hue City for its military character, and to the My Lai Massacre for its moral character. But you supported this operation.

Fallujah is currently under siege once again. You have stated that US troops will not be sent back to Iraq to assist in the current siege, but you have agreed that the US should send weapons to the Iraqi government. I am writing to implore that you do everything within your ability to stop shipments of US weapons to Iraq, whether they are sold, gifted, or loaned. Arming an oppressive regime so that they may better crush a popular uprising is not in the best interest of Americans or Iraqis.

During that 2nd siege of Fallujah we killed thousands of civilians, displaced hundreds of thousands, destroyed nearly the entire city, and brought immeasurable loss and hardship upon those poor people. Since then I have devoted my life to raising awareness about the suffering I helped create in Fallujah, and to assisting Fallujans in their struggle with a public health disaster and ongoing repression.

I feel a moral obligation to do whatever is within my power to help these people who I once hurt. But I was not a lone actor in Iraq. I had the support of a nation behind me and I was taking orders from the world’s most powerful military. The 2nd siege of Fallujah was not exceptional; rather it was symbolic of our military’s conduct in Iraq and the way that our mission impacted the lives of Iraqis. Our war and occupation took so much from them. It resulted in hundreds of thousands of deaths, millions displaced, permanent environmental contamination, and a new repressive regime that most Iraqis regard as begin more brutal than that of Saddam Hussein. This is the legacy of America’s involvement in Iraq. The least that we can do at this point is to end our complicity in their suffering.

The current violence in Fallujah has been misrepresented in the media. The Iraqi Ministry of Interior asserted earlier in the month that al Qaeda had taken over half of Fallujah and the media parroted this assertion. However, journalists who have done serious investigations into this assertion found it to be false. The uprising in Fallujah is a popular uprising, not one lead by an international jihadist group. The Iraqi government has not been attacking al Qaeda in Fallujah. Their assault has been indiscriminate, killing dozens of civilians and wounding even more. Many of these deaths have been documented by human rights organizations within Fallujah.

I know that the US plans to send further shipments of Apache attack helicopters and Hellfire missiles. If we continue to send weapons to the Iraqi government, we will be further complicit in this violence. Iraqis have long known the Maliki regime to be brutal and repressive. This is not a regime the US should be sending weapons to. Some of your colleagues in Congress have voiced this same concern.

When you spoke before the Senate Foreign Relations Committee in 1971, you spoke with compassion for the Vietnamese people. You sympathized with the suffering that our illegitimate war brought to them. I am asking you to do the same for Iraqis. Please end all shipments of US made weapons to Iraq.

I have attached a petition with 11,610 signatures. Most of the signatories are Americans like myself who want to be able to feel proud of their country, but cannot do so while we are assisting the Iraqi government in its violent internal repression.

Posted by Lisa Savage at 3:44 AM No comments:

"They Would Love To Put A Bullet In My Head" Snowden Interview Blacked Out In U.S. Media

"They would love to put a bullet in my head," says Edward Snowden, repeating statements made by U.S. government officials in a BuzzFeed interview about his leaks on the doings of the NSA.

It has also been reported that each time the interview with Snowden by a Germany's Channel NDR pops up on YouTube, it is taken right down again. Nor were the contents of the interview reported in the U.S. corporate media, despite the fact that what he discusses is of grave concern to us all. Or perhaps because of that fact.

Do you think the powers that be are worried about gamers finding out the NSA hacked user data on games, like Angry Birds? You will be hard pressed to find any report of it in the U.S. mainstream media, though it's all over English language media elsewhere. Here, via Russia Today, is evidence of the reaction of Angry Hackers to that news:

Meanwhile, during the appearance of U.S. spy chiefs before Congress last week, Senators Susan Collins and Barbara Mikulski took the the opportunity for some Snowden-bashing. Because his leaks have scared the wits out of those in charge of what our vast and lumbering empire likes to think are its "intelligence" capabilities.

Claiming Snowden did "great damage" to the U.S. by sharing information about the NSA with the people who pay for it, Sen. Collins did not come off as particularly well-informed -- she called Snowden "Edwin" instead of Edward (Mikulski called him "Eric").

Here's the 30 minute interview (it's in English) as shared on the website LiveLeak.

Posted by Lisa Savage at 2:57 AM No comments: