by Bruce Gagnon
On June 24, 2019, 22 non-violent peace activists were arrested at BIW during another destroyer 'christening' as they blocked buses and cars full of people trying to enter the shipyard for the event.

On that day nine in the group refused to pay the $60 bail commissioner fee and spent two nights in jail.  In the end some of those arrested paid a $152 fine (being told they would lose their drivers license if they did not pay the fine), some had their charges dropped (after a screw up at the DA's office) and seven decided to take their case before the West Bath District Court in a bench trial.

(The entire group had wanted a jury trial but the state reduced the charges to a 'jay walking infraction' that was not severe enough to warrant a jury trial.  Thus a bench trial, before a judge only, was in order.)

This morning four of the remaining defendants (Brown Lethem, Natasha Mayers, Ridgely Fuller & Ashley Bahlkow) appeared before Judge Joseph Field for the bench trial. After a long period of sitting around the court house the case was finally called before Judge Field around 11:00 am.

Judge Field is known in peace movement circles as the presiding judge in 1997 following a plowshares action at BIW.

Before dawn on February 12, 1997, Ash Wednesday, the beginning of the Christian season of Lent, six religious peace activists, Steve Baggarly from Norfolk, VA, Philip Berrigan, a former Josephite priest from Baltimore, Mark Colville of New Haven, CT, Susan Crane, from Baltimore, Tom Lewis-Borbely of Worcester, MA and the Rev. Steve Kelly, a Jesuit priest from San Jose, CA, calling themselves Prince of Peace Plowshares, boarded the USS The Sullivans, an Aegis destroyer, at BIW. Inspired by Isaiah’s prophecy to turn swords into plowshares, they poured their own blood and used hammers to beat on the hatches covering the tubes from which nuclear missiles can be fired and unfurled a banner which read Prince of Peace Plowshares, “They shall beat their swords into plowshares and their spears into pruning hooks…Isaiah 2:4.”

On that same day in 1997 in Sagadahoc County District Court, when the Prince of Peace Plowshares were brought to arraignment, Judge Joseph Field felt impassioned enough to say, “Anyone of my generation knows Philip Berrigan. He is a moral giant, the conscience of a generation.”

When we entered the court room today we didn't know who the presiding judge would be.  It wasn't until the proceedings were over that we realized that Judge Field had once again made an impassioned statement for peace and our constitutional rights.

When the judge began this morning he said the following:

I personally agree with what you are doing.  I support your right to speak out.  No damages occurred by your action.

I am horrified about our rights being taken away these days.

I want you to know this. We are not seeing any [positive] leadership out of Washington DC.

Judge Field went on to cancel the $152 fine the District Attorney's office was requesting.  Instead he gave the four activists 20 hours of community service at a place "where real people are being touched".

He then sent his clerk back into his office to retrieve his laptop which he then used to search for something which he tearfully read in full before the courtroom.  It was a quote by former President Eisenhower:

Every gun that is made, every warship launched, every rocket fired signifies, in the final sense, a theft from those who hunger and are not fed, those who are cold and are not clothed.

This world in arms is not spending money alone.

It is spending the sweat of its laborers, the genius of its scientists, the hopes of its children.

The cost of one modern heavy bomber is this: a modern brick school in more than 30 cities.

It is two electric power plants, each serving a town of 60,000 population.

It is two fine, fully equipped hospitals. It is some 50 miles of concrete highway.

We pay for a single fighter plane with a half million bushels of wheat.

We pay for a single destroyer with new homes that could have housed more than 8,000 people.

This, I repeat, is the best way of life to be found on the road the world has been taking.

This is not a way of life at all, in any true sense. Under the cloud of threatening war, it is humanity hanging from a cross of iron.


Judge Field then asked each of the four defendants if they wished to make a statement.  Natasha Mayers told the story about a Labor Day rally at BIW in 1994 joined by President Bill Clinton, Sen. George Mitchell, Rep. Tom Andrews, BIW President Buzz Fitzgerald and other national and local labor leaders. They all called for the conversion of the shipyard to civilian production so there is indeed a tradition in Bath along these lines to ensure job and community stability.

The judge responded by asking what kinds of products could be built at the shipyard?  Attorney Logan Perkins (Belfast), representing the four, stated, "These are people of conscience who risked their freedom to take a stand against climate change by peaceful assembly.

They are not anti-worker, not anti-BIW.  They insist we convert the Pentagon - the world's biggest polluter which is on a death march of producing destroyers at BIW. They have a bold and creative vision to transform our economy to sun, wind, and rail systems."

Judge Field closed the legal proceedings with these words, "Go ye hence and continue to do good work.  Keep it non-violent without property damage."

As the judge rose those in attendance applauded this remarkable man and this incredible experience - unlike any we've ever experienced in an American courtroom.
Posted by Lisa Savage at 3:59 PM No comments:

Stench Of Bullshit In The Air From Iowa To Maine 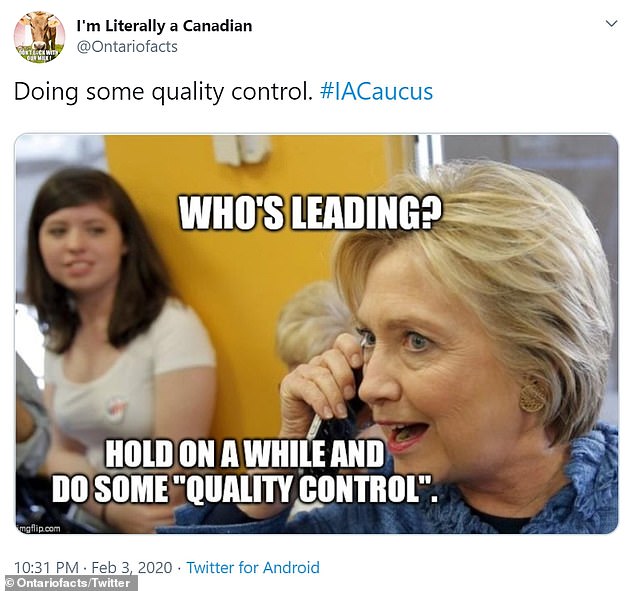 What is that nasty smell in the air? Some might call it bullshit. Others, the rot at the core of the "we're not the Republicans, so you owe us your votes" Democratic Party. Amid the blatant cheating and disinformation management of the Iowa caucuses that kicked off the 2020 election year, I'm not surprised that

Democrats in Maine are fibbing to gullible college students about my campaign for the U.S. Senate as a Green.

Did you know that, according to the Women's March and other Democratic Party front groups, my campaign volunteers are guilty of a criminal act when they register new voters as Greens? I have that in writing from a Women's March organizer in Maine sending passive-aggressive emails to allegedly "help" us stay on the right side of the law.

Then there's the supposedly non-partisan group registering voters at my alma mater and telling environmental activists supporting our campaign the same lie. They're citing a Federal Election Commission regulation that stipulates what corporations and labor organizations* may or many not do while conducting voter registration drives. 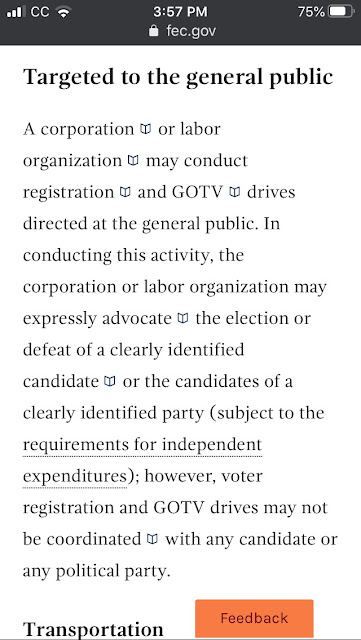 * Note: Lisa for Maine is neither a corporation nor a labor organization, in case there is confusion on this point. (You might think that our relatively small campaign would be no threat to Maine Democrats with their millions of dollars of corporate contributions. But ranked choice voting is a game changer.)


Fun fact: when campaigns pick up ballot petitions from the Secretary of State in Augusta, we're also given a stack of voter registration cards.

So either the SOS is trying to entrap us into illegal activity, or they understand FEC regulations as they pertain to campaigns. 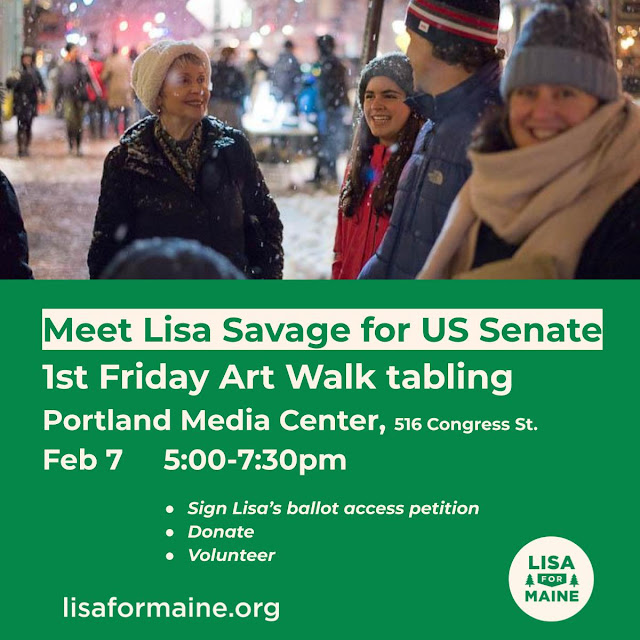 Extreme conditions are imposed for ballot access: it must be conducted during ice storm season January 1-March 15; commence weeks before college students are back from their winter holiday; and Greens must collect the same number of signatures as the two corporate parties.

Candidates sometimes share surplus voter reg cards with other candidates whose need may be greater. When supplies run low, we can also photocopy a blank voter reg card and use copies to register new Maine Green Independent Party members -- and the Secretary of State is okay with that.

If the voting public has not yet figured out that Democratic Party operatives will lie, cheat, and smear third party candidates they perceive as a threat, then they must not be paying attention.

One of my favorite bloggers had a field day opining on the Iowa caucus debacle as in her recent post "The Myth Of Incompetence: DNC Scandals Are A Feature, Not A Bug" by Caitlin Johnstone.

I keep seeing the word “incompetence” thrown around. “Gosh these Democratic Party leaders are so incompetent!”, they say. “How can anyone be so bad at their job?”

Their job is not to win elections and garner public support, their job is to ensure the perpetuation of the status quo which rewards them so handsomely for their malignant behavior. Toward this end they are not incompetent at all. They know exactly what they’re doing, and they’re doing it well.

They are extremely competent. Depraved, certainly. Sociopathic, possibly. But not incompetent.


Yet my friends still under the sway of corporate-controlled "news" are spending sleepless nights worrying about whether Bernie will get the nomination this time around. (Spoiler alert: he won't.)

Meanwhile, my team is out on the streets of Portland in the bitter cold talking to potential voters while being interrupted by "blue no matter who" folks with clipboards who want a signature criticizing unpopular Senator Susan Collins.

My team of dedicated Greens is also competing with billionaire Mike Bloomberg paying $20 per signature in Maine for his ballot access petitions.

It's enough to make a grandmother want to abandon pushing the boulder uphill and go back to spending weekends with her little grandchildren.

But being bullied doesn't sit well with me. It tends to make me more determined, even stubborn.

In the face of adversity and dirty tricks, I'll stay the course. And I invite you to stay with me because, in the race to elect a senator for people, planet, and peace, we're in it to win it. 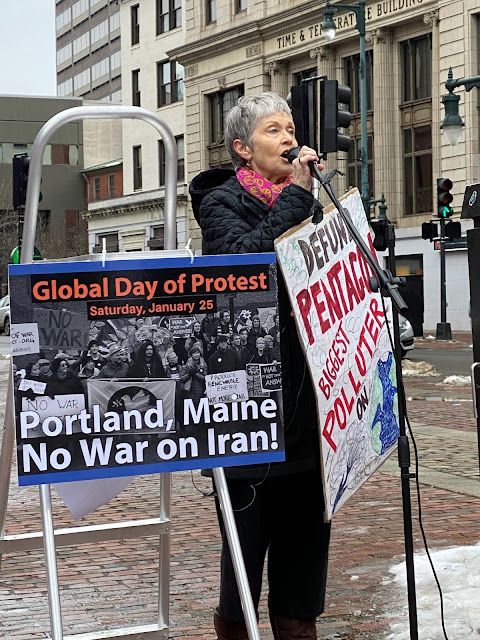 Posted by Lisa Savage at 3:27 AM No comments: