White People Sure Do Get Angry About Racism...Their Own Racism

It's been eye opening how many angry white people have crawled into view following the Mike Brown grand jury travesty of justice. They seem positively gleeful sharing the character assassination factoids repeated on Fox News and the like. It's getting hard to go anywhere in central Maine where I live without encountering gratuitous hate speech aimed at Brown and his community. How best to respond?

What I feel like saying when people are going on like this is some version of: Did you ever have an 18 year old son and did he ever do stupid stuff like walk down the middle of the street or talk back to cops, and did the police execute him without trial?

But what I actually said in response to racist spew the other day at a hair salon was: A black man is three times more likely to be killed by police than a white man. Three times. That's nationally.*

The spewers were extremely shocked that I, a white woman, spoke up and entered their loud public conversation. Conflict and political discussions are to be avoided at all times in polite society, and I think are viewed as inherently dangerous. I'm pretty sure if the women having the discussion had known that one of their listeners deeply disagreed, they would have not expressed themselves until I had departed.

I warned the woman washing my hair that I was about to say something. She became very nervous, conciliatory, and ratcheted up the inane chatter about any subject she could think of that didn't matter.

No one made any response to what I said, and the racist remarks ceased. In fact, it was downright silent for a good five minutes. Then, conversation turned to the neutral topics of cooking and shopping.

My first impulse was to decide never to go to that salon again. But I challenge myself on that impulse, because insulating myself from people who disagree with me is no way to learn. My impulse to do that is, I think, cowardly.

Since I'm not moving to an urban area anytime soon, there's not much danger of it happening anyway.

But I can feel people pulling away from each other along the divide of white supremacy versus equal rights. This is how civil wars get started. Later, people will report that they had lived with their neighbors in peace for generations, agreeing to disagree, until one day the powers that be wanted a civil war. The propaganda machine went into overdrive pumping out hateful invective at that point, and the mass violence it was designed to incite eventually ensued.

I like to look for patterns, and I believe history matters.
Let me give another example. On Facebook this Thanksgiving there were a couple of good articles (here and here) about the true story behind the myth of a chummy dinner between Pilgrims and Native Americans. I shared them on my page as I went about collecting food, cooking, and looking forward gratefully to a warm meal with family and friends.

Apparently these articles offended some Facebook friends. (I define a fb friend as someone who gets my posts in their news feed. It has very little to do with friendship as practiced outside of cyberspace.)

One of them wrote:


Goodness people...let's repurpose Thanksgiving so that it is not associated with any historical event and is merely a day set aside for giving thanks. It's been done around the world for eons...after the harvest is in a feast is held and gratitude is expressed, end of story. It needs no politicizing. It's a traditional day to gather with family and friends to cook and eat and acknowledge that we have so much to be thankful for its almost overwhelming. Giving thanks is nourishment for the soul. It' strengthens family and community. It's necessary for human culture. We do not need to feel guilty about Thanksgiving. Happy Thanksgiving!

Can you tell this person is white? What was your first clue? Here's a comment a younger member of the same family added: "Growing up we might have been white, but we certainly were not privileged."

People who claim that politics can be avoided are nearly always from the dominant group in society. It's a luxury they can afford. They are willing to be tone deaf when indigenous people object to celebrating events associated with genocide. They aren't very interested in listening to the truth of people who don't share their experience and/or their point of view.

I never understand how we're going to learn anything if we won't listen to others, especially others with whom we disagree.

So, I'll keep on marching with people like videographers Regis Tremblay
and the very talented Lauren Kennedy.

I'll keep on listening and reading as much as I can. And I'll be thankful when another friend shares moving words from a woman of color, Lauryn Hill, who revised and covered "These Are A Few Of My Favorite Things" in this song entitled "Black Rage."

*CORRECTION: I misquoted former ACLU of Maine and senatorial candidate Shenna Bellows. What she actually said at a rally way past my bedtime on Nov. 25 was that a black man is three times more likely to be arrested than a white man. That's nationally. In Portland, Maine the rate is 2.6 times more likely.

The actual data on the rate of black and white deaths by police shooting is not collected nationally. But for comparison here is a decade's worth of data on the NYPD: 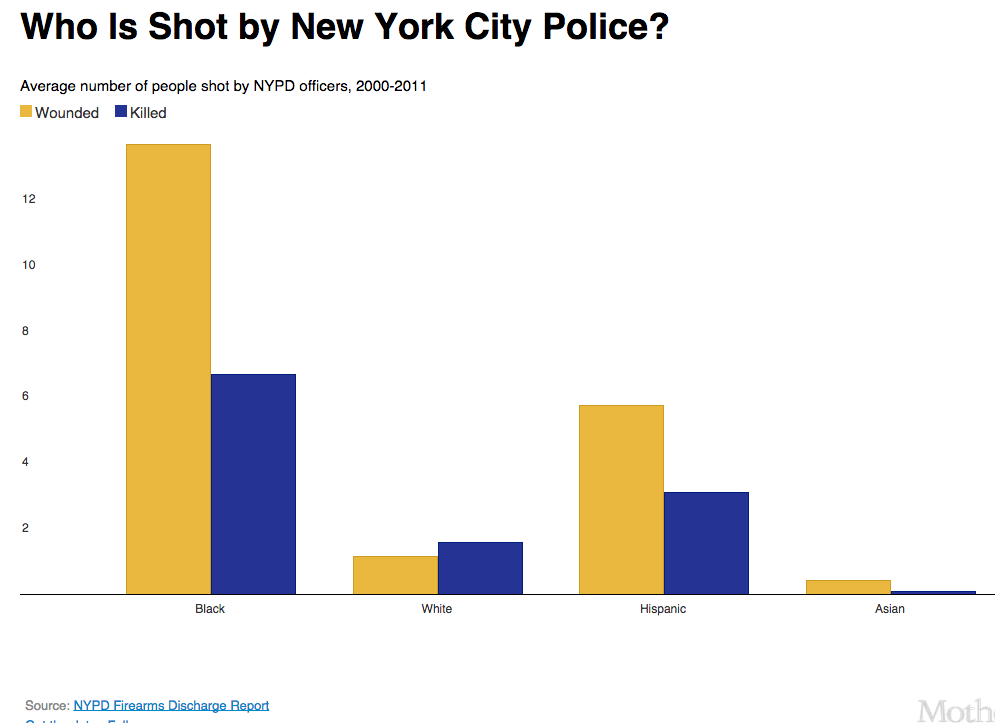 The white rage is really ugly and sickeningly triumphant in its juvenile glee. There's a good article on this:

It is really sad to see the incredible reality-twisting that goes on, what humans are capable of in terms of hiding from justice to assert their own power. "The truth will set you free"-- but only if people chose to see it. It's not even conscious, I don't think, the selfish fixation on keeping power and keeping 'outsiders' down.

Thanks for your comment. Sorry that moderation makes for a delay in posting your comments.

I love what you guys are usually up too. Such clever work and reporting!
Keep up the great works guys I've incorporated you guys to blogroll.