Chelsea Manning Is Free Today, Most Important Whistleblower Of Our Time @xychelsea 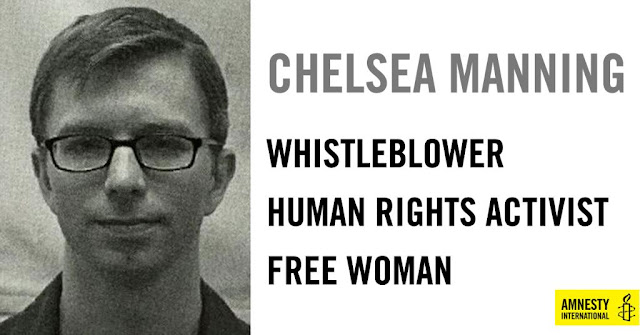 Chelsea Manning is hugely important as a whistleblower who brought us many, many inconvenient truths about our national government in action around the planet. Here from blogger Greg Mitchell (co-author with Kevin Gosztola of a book on Manning):


First, just a very partial list from "Cablegate" (keep in mind, this does not include many other bombshells that caused a stir in smaller nations abroad):

-Yemeni president lied to his own people, claiming his military carried out air strikes on militants actually done by U.S.  All part of giving U.S. full rein in country against terrorists.
-Details on Vatican hiding big sex abuse cases in Ireland.
-U.S. tried to get Spain to curb its probes of Gitmo torture and rendition.
-Egyptian torturers trained by FBI—although allegedly to teach the human rights issues.
-State Dept memo: U.S.-backed 2009 coup in Honduras was 'illegal and unconstitutional.'”
-Cables on Tunisia appear to help spark revolt in that country. The country's ruling elite described as “The Family,” with Mafia-like skimming throughout the economy. The country's First Lady may have made massive profits off a private school.
-U.S. knew all about massive corruption in Tunisia back in 2006 but went on supporting the government anyway, making it the pillar of its North Africa policy.
-Cables showed the UK promised in 2009 to protect U.S interests in the official Chilcot inquiry on the start of the Iraq war.
-U.S. pressured the European Union to accept GM — genetic modification, that is.
-Washington was misled by our own diplomats on Russia-Georgia showdown.
-Extremely important historical document finally released in full: Ambassador April Glaspie's cable from Iraq in 1990 on meeting with Saddam Hussein before Kuwait invasion.
-The UK sidestepped a ban on housing cluster bombs. Officials concealed from Parliament how the U.S. is allowed to bring weapons on to British soil in defiance of treaty.
-New York Times:  “From hundreds of diplomatic cables, Afghanistan emerges as a looking-glass land where bribery, extortion and embezzlement are the norm and the honest man is a distinct outlier.”
-Afghan vice president left country with $52 million “in cash.”
-Shocking levels of U.S. spying at the United Nations (beyond what was commonly assumed) and intense use of diplomats abroad in intelligence-gathering roles.
-Potential environmental disaster kept secret by the U.S. when a large consignment of highly enriched uranium in Libya came close to cracking open and leaking radioactive material into the atmosphere.
-U.S. used threats, spying, and more to try to get its way at last year's crucial climate conference in Copenhagen.
-Hundreds of cables detail U.S. use of diplomats as “sales” agents, more than previously thought, centering on jet rivalry of Boeing vs. Airbus. Hints of corruption and bribes.
-Millions in U.S. military aid for fighting Pakistani insurgents went to other gov't uses (or stolen) instead.
-Israel wanted to bring Gaza to the ”brink of collapse.”
-The U.S. secret services used Turkey as a base to transport terrorism suspects as part of its extraordinary rendition program.


Most famous of all Chelsea's many important leaks is the video known as "Collateral Murder" which you can see here with commentary from Ethan McCord.

He was a soldier on the ground trying to resuce the children being shot at from the soldiers hovering over them in a helicopter (location of the video camera).