#Gangjeong: "To Honor Our Descendants, We Cannot Stop" 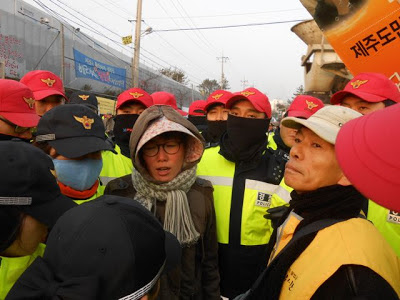 I am re-posting these most recent reports from Carolyn, who is on Jeju Island in South Korea helping with the resistance to the naval base under construction there.

Where the Winds Blow

The weather is changing. In March, Gangjeong fishing boats used to go out for 20 days.
But last year they went out for four;
in November, not at all.
The winds were blowing too hard.

The southern part of Jeju, the area chosen by the navy for its base, is the area of the island most severely impacted by typhoons. Though many fishing villages on Jeju Island were built close to the sea, the villagers of Gangjeong built their village further inland, knowing the power of its stormy seas.
In August, a typhoon blew away the plastic tarpaulin and damaged the frame arching over my host’s house. But “I was so happy!” she says, gesturing the way the season’s typhoons also upturned and damaged seven caissons at the base construction site. (They weigh 8,800 tons.) Many tetrapods were also broken.
Two days after the storm, members of the community came to fix her roof. With ten people atop her house, she feared the roof would collapse with their weight or that their cigarettes would burn a hole in the new plastic, but all ended well.
Now she hopes for another big storm.

DG displays her dolls on a low table across from the gates.
One by one, she places them against small cement blocks, propping up their heads.
Each one represents an activist who has joined the struggle against the naval base.
I push back one doll’s yarn hair to get a clearer photo of his face.

When I earlier saw photos of these dolls,
S. pointed out one with a wide-brimmed straw hat.
Can you believe that’s me? she asked, smiling.

I
Guards haul away the huge sheets of plastic,
the logs and barrel stove, all blocking the upper gate.
One guard begins to hose down the pavement, clearing away the wood chips
and bark left behind.
I stand in place, a bit to the side, with my sign.
I wonder if he’ll spray me with the hose, perhaps my feet.
Instead he just scowls at me, saying words I don’t understand,
then turns off the hose.
Soon afterwards, the police officer whistles another line of cement trucks into the base.

II
Another day.
Cement trucks rumble uphill towards the upper gate
as we descend to the gate from higher up the hill.
JD reaches the gate before the trucks and stands in front of the entrance.
She yells at the guards.
The guards growl in disgust.
What seemed an easy entry for the trucks is now delayed.

III
A quiet morning.
No trucks pass through the gates.
Small birds sing from the trees whose limbs stretch over the activist tents.
One door to the lower gate is open.
I watch a private security guard play with a dog on a long tether
just inside the gate.
Later, he takes the dog for a short stretch along the Gangjeong Cheon,
which flows beside the construction site.

Across the road sits a two-entrance dog house for a mother and puppy.
A blue peace sign, a yellow flower, and the cartoon-like image of a dog’s head are painted on the house.
No naval base is in yellow across the roof.
The peace dogs are away for the morning.

IV
Confrontation ratchets up.
Only minutes after the activists have rebuilt the blockade,
and arranged the chair backs to read Save Gangjeong Village,
the private security guards begin again to throw the firewood as far as they can away from the gate.
One activist lays his body over some of the logs, preventing their removal.
When a guard lifts a wooden stool,
the activist gets up from the log pile and grabs the other side of the stool.
The guard releases it.
Another activist exchanges yells with one of the guards
while a third begins tossing the wood back in front of the gate.
When I join her, one of the guards smiles at me
and gestures for me to put the logs back down below.
My eyes smile back, then I walk the wood in front of the gate.
The interplay continues, guards throwing the wood back over our heads.
The tension builds, then subsides.
The guards stop throwing wood;
we stop returning it.
We sit in quiet around the stove.

Rough notes of the mayor’s words:

It’s been a long time since this room has been filled. There’s a slogan: five years and eight months, but we will fight for more than 58 years. We have made an effort despite the result of the election and the National Assembly (budget) vote. History will remember us. . . .
We have fought to oppose the naval base. And in the court, I told the judge I think society should be where common sense is shared by the people. We live in a society in which common sense is not accepted. . . .
During these days, we have to stop construction. The only way to do this is for us to continue fighting. . . .
To honor our descendants, we cannot stop our fighting.

Carolyn
Maine
Posted by Lisa Savage at 5:43 AM