USA Can't Afford Food Stamps But Can Buy Missiles at $1.4 Million Each 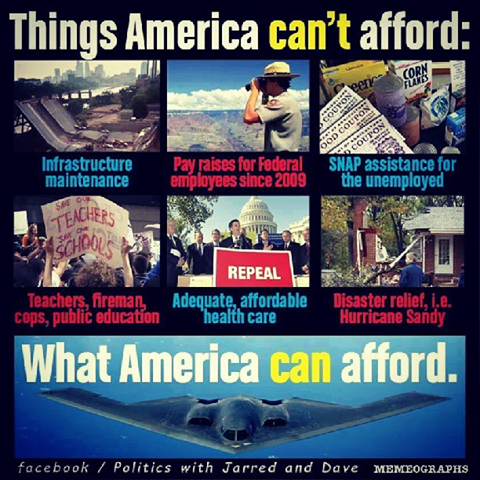 According to a National Education Association legislative alert this week:


The House...passed the Nutrition Reform and Work Opportunity Act of 2013 (H.R. 3102), which would slash food stamps – officially the Supplemental Nutrition Assistance Program (SNAP) – by nearly $40 billion over the next decade. The cuts come at a time when 21 million children rely on SNAP for food, and one in five children in America lives in poverty. The enrollment of low-income children in school meal programs would be undermined and 210,000 children would lose access to nutritious meals at school.

The NEA would like to spin this as a "bad Republicans vs. good Democrats" issue noting that the vote split along party lines, but they willfully overlook the fact that corporate welfare for the "defense" industry continues to gush along with full support from Democrats in Congress.

The partial cost of the "limited, surgical"(sic) strike on Syria that President Obama and Secretary of State Kerry, both Democrats, were so keen to get started can be partially quantified using the price tag of the weapons of mass destruction that would be involved.

The missiles on warships now waiting in the eastern Mediterranean include Tomahawk Land Attack Missiles which cost $1.4 million each, Joint Air to Surface Standoff Missiles which cost $$900,000 each, and Joint Standoff Weapons that cost $285,000 each. (Thanks to Vice for the price tags.) How many hot breakfasts for poor children would that buy?

Then there are the expensive airplanes on order for Afghanistan, "four Lockheed Martin Corp C-130 cargo planes and 20 A29 Super Tucano planes built by Sierra Nevada Corp" according to Reuters. Afghanistan is the war Obama thought was a smart investment, the war whose costs will continue to climb for decades to come according to economist Linda Bilmes.

What's the problem? Corporations bribing politicians to spend our tax dollars on their products.

At the Common Ground Fair in Unity, Maine last weekend Ben Cohen of Ben & Jerry's offered this Rube Goldberg device designed to stamp your bills with a slogan in red ink: NOT TO BE USED TO BRIBE POLITICIANS. Ben urged fairgoers to circulate the bills widely.

Tine to bring our war dollars home: stop using our taxes to kill people, and re-direct the immense savings toward caring for children everywhere.
Posted by Lisa Savage at 3:56 AM No comments:

Courtesy of: http://www.blogactionday.org
Posted by Lisa Savage at 2:15 PM No comments:

Email ThisBlogThis!Share to TwitterShare to FacebookShare to Pinterest
Labels: #BAD13

How I wish I had made this video. So hilarious, so scary.
Posted by Lisa Savage at 4:22 PM 1 comment:

Who Wants War On #Syria Anyway? Follow The Money

Who wants war on $yria anyway? Hint: it's not the troops.

According to Eric Boehm of Watchdog.org reporting data from MapLight, all senators on the Foreign Relations Committee have received campaign funds from defense contractors -- but those who voted "yes" on bombing syria have received around twice as much as those voting "no" did.

How do they justify this conflict of interest? They don't bother. Instead, they send concerned constituents letters like the one I got from my senator, Susan Collins, who is not on the committee but is deeply in bed with defense contractors.

Translation: I know which side my bread is buttered on, and you can expect a "yes" vote from me.

Who else wants the U.S. to bomb Syria? AIPAC -- the American Israel Public Affairs Committee -- will swarm over Capitol Hill this week, twisting arms and writing big checks. They hope to convince our representatives in Congress to authorize the use of military force against Syria's alleged use of chemical weapons (I know gas killed hundred or possibly thousands of civilians, but who used the gas is still unclear). AIPAC reportedly believes that punishing Syria will send a strong message to Iran.

No doubt. But I also believed Putin when he reportedly told Obama at the G20 summit that Russia will "help" Syria if it is attacked by the US or NATO.

That is why this history major fears defense contractors are licking their chops at the prospect of US action likely to set off a region-wide, if not planet-wide, war.

Posted by Lisa Savage at 3:33 AM No comments:

Email ThisBlogThis!Share to TwitterShare to FacebookShare to Pinterest
Labels: #Syria 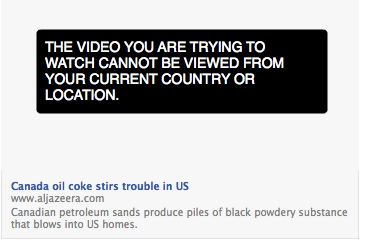 I posted the item above on Facebook early this morning. An environmental leader in my community tried to watch the video and he got the same message I did. According to Newsmax.com:

The decision to block American audiences from viewing their international news videos is apparently a concession on the part of the Persian Gulf-based television news network to get U.S. TV operators to carry them, Gigaom.com reported.


Canada's oil sands boom is producing an unwanted by-product, huge piles of petroleum coke. Tens of millions of tonnes of the black powdery substance are accumulating in both Canada and the US. Al Jazeera's Daniel Lak reports from the US city of Detroit, where large clouds of coke from nearby Canada blew into homes last month.

This suppression of key health information for citizens reminds me of the virtual blackout of news from Fukushima these past two and half years.

Dedicated nuclear disaster watchers have shared as much information as they could gather or glean, but only this month did corporate news outlets finally begin reporting on a situation that is already well into its meltdown phase, as in NBC reporting yesterday Radiation spikes to fatal levels at Japan's Fukushima nuclear plant. Had information been freely available to us since the earthquake and tsunami, might TEPCO and the Japanese government have received the kind of urgent expert help they have needed to possibly contain the disastrous effects on human and other life on our planet? We'll never know.

When corporations own media outlets, put politicians in office and remove them, and ignore the will of the people, we get action that focuses on capitalism's bottom line rather than life's bottom line. From Al Jazeera's article today on the Prime Minister of Japan (finally) stepping in to head up the disaster response:


Public concern over Fukushima, revived by the news of leaks of radiated water at the plant, have threatened to further delay the restart of other off-line reactors - a crucial part of Abe's plan for economic revival and a pillar of the turnaround plan Tepco has given its creditor banks.

Note that "public concern" is the threat here, not the 1,800 millisieverts per hour of radiation TEPCO admits it detected, a level which will kill a human in four hours.

Meanwhile, keeping people well distracted: the imminent threat that the US will bomb Syria. Around 80% of the public currently opposes this military action -- for a variety of sound reasons. Demonstrations broke out all over the globe after corporate government spokesmen Obama and Kerry went on t.v. to rattle their sabres at Assad.

Compare if you will the reporting on Portland, Maine's protest and march organized by Veterans for Peace chapters and joined by about 50 participants.

The corporate news version was produced by a writer for the Portland Press Herald, which is owned by the hedge fund billionaire husband of Democrat Chellie Pingree, who represents Portland in Congress.

The second report was compiled from footage and interviews. I was pleased to see my CODEPINK associate Pat Taub speaking up for the grandchildren, and calling for "more feet on the street" to keep pressure on as Congress considers the matter. Also pleased to hear a handful of citizens pointing out that budget cuts at home are a direct result of out of control spending on the military.

The same day I compared these two reports I noticed a Huff Po column by Norman Solomon warning that the propaganda ramp up to sell an attack on Syria will be beyond the scope of anything we've seen so far. I was not surprised since when I searched for "protest Syria" I found numerous corporate news accounts giving equal billing to Syrian-Americans calling for the US to bomb Assad regime strongholds, and repeating a lie against CODEPINK that we have been "disturbingly silent" about criticizing the Obama administration's ongoing air strikes in numerous countries. I have seen this lie -- which I believe is intended to herd us onto one side of the false dichotomy of Democrats vs. Republicans -- so many times in so many places that I sense it must spring from a common source.

Activists have used blogs, Twitter, Facebook, web sites, and email as tools to share information and plan resistance.
Facebook is how I learned of police state creeping in this report that veteran Emily Yates was arrested and roughed up in Philadelphia for playing her banjo in a spot on Independence Mall deemed unacceptable by park police. Last summer I experienced the arbitrary zones and restrictions imposed in this public space during the Occupy National Gathering. Good thing I did not have a banjo.

Also via Facebook, I learned of this Arizona checkpoint action recording threats, dogs, and the order to "shut up." If this brave citizen wasn't a white woman with a white male companion, a camera, and lots of family houses, how might this incident have ended?

Any day now I expect to open my blog and find that access has been denied. Information control is the order of the day.
Posted by Lisa Savage at 5:04 AM 1 comment: